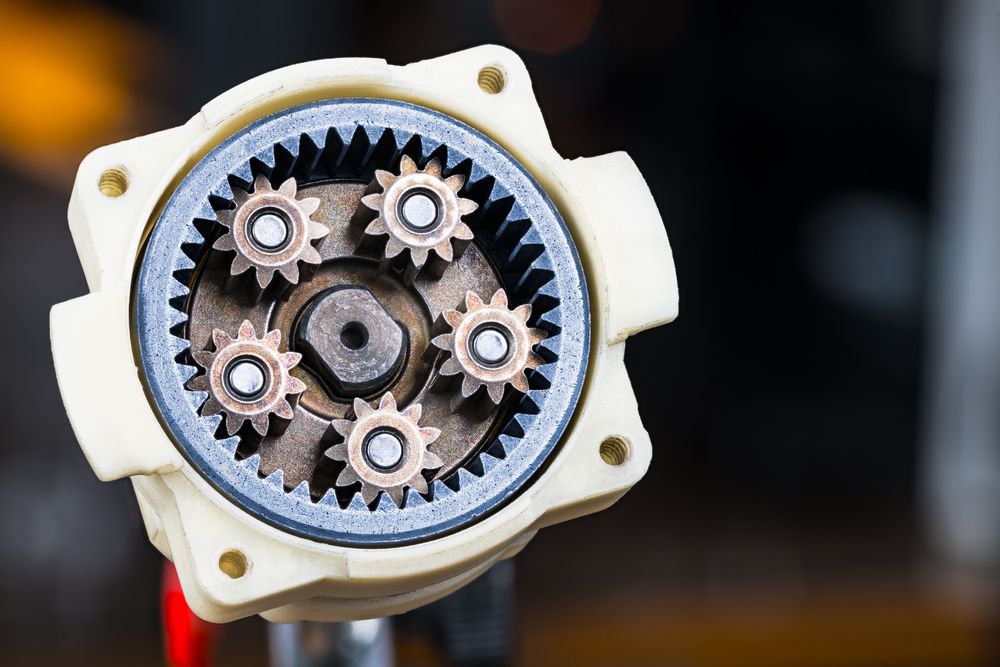 Following the thread of almost any scientific theory or principle will eventually lead you to the idea of planetary motion. If our planets weren’t spinning and rotating the way they do, life as we know it might not exist.

This idea, termed the “epicyclic system,” has been harnessed by scientists and applied to technology. Planetary gears are the individual parts of these systems.

The concept has helped researchers to develop many products, particularly in machinery. Without planetary gears, we wouldn’t have products like press brakes, which bend sheet metal, or the little mechanisms that change the height of medical tables.

Anyone who wants to be successful in the engineering field has to master the concept of epicyclic systems, and that’s not always as easy as it sounds. In this article, we break down the steps behind brakes and other products in which planetary gears are used.

Once you learn the fundamentals of epicyclic systems, you’ll be able to recognize them in action and apply them to your own designs.

The Parts of an Epicyclic System

Epicyclic gear trains are a mix of pieces that consist of spur gears, teeth, and an orbit. The circulation of the gear emulates the solar system and the way that planets orbit in an epicyclic shape, hence the name.

When you’re breaking down the planetary gear train, the whole thing can be divided into four main sections:

The system’s central gear, the driving sun pinion attaches to the clamping system. This, in turn, gives the motor shaft the mechanical connection it needs to operate. The planetary gears rotate between the sun pinion and the ring gear.

The carrier holds one or more peripheral planet gears, all the same size, meshed with the sun gear. It is the representation of the output shaft of the entire gearbox.

Since the carrier supports every transmission component in the system, it’s essential to establishing torque. The engine torque is connected with the ground in the planet carrier.

The annulus is the outer ring in the gear system. It has inward-facing teeth that mesh seamlessly with the planet gear or gears. The annulus can rotate or be held fixed.

Planetary gears are mounted on the carrier. They roll between the sun pinion and the ring gear and have the sole duty of transferring the torque necessary to do the job. The number of teeth on the gears or annulus doesn’t matter.

However, when you increase the number of planetary gears, the distribution of the load can be increased, too. This lets you transmit more torque. Planetary gears make for an efficient method of load distribution and high rolling power.

Engineers using gearboxes have a lot of control over the speed and torque by changing the parts of the whole. When you need a lot of output levels and high speeds, planetary gearboxes are the preferred method.

Trying to become a professional engineer? Check out this article: How to Become a Mechanical Engineer (+How Long It Takes). 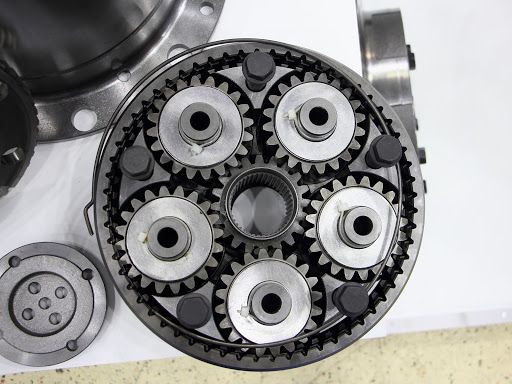 As a mechanical engineering student, epicyclic systems can feel overwhelming. But they don’t have to be.

New engineers can master the concept by breaking the idea down into steps and processes, starting with key terminology and moving into types of systems.

Knowing the parts of epicyclic systems will help you understand how the idea of planets orbiting relates to the gearboxes. The next step is to grasp how the parts go together to create whole systems.

There are only three types used in engineering:

Simple planetary epicyclic systems aren’t very intuitive. The input rotation is converted into an output rotation, depending on the placement of the sun, carrier, and annulus. One of the components is fixed, one is an input that provides power, and the last is the output that receives the power.

Compound planetary gears are more complicated. They can include any number of components:

Using a compound epicyclic system gives you the benefit of a lower reduction ratio and more flexible configurations.

Coupled epicyclic sets substantially increase the complexity of the planetary gearbox. Two epicyclic sets can be coupled 36 ways, depending on the placement of the input, output, and reaction. But when you want more individualized outcomes for your machine, the way to get there is likely through a coupled planetary gear system.

These three types of systems can result in multiple different arrangements, all with their own specific ratios:

A planetary gear train is the engineering magic that turns a few basic parts into a high-powered machine, with different gears and higher torque at your control.

The Benefits of Using Epicyclic Systems

Planetary gears allow you to predict and then create the torque needed for the job at hand.

To add to these benefits, an engineer can design multiple types of systems as long as the ring gear has a constant size. Almost any torque can be achieved by playing with gear ratios.

The basic tenet of ratios says the smaller the sun gear is, the greater the ratio. But if you want to increase the transmission ratio size, all you have to do is connect multiple gearboxes in the same ring gear, thus creating multi-stage gearboxes.

Ring gear can be rotated in any direction or fixed so the speed and torque are overlaid. This is essential in ensuring the engineer has total control of what could become a very powerful machine. Changing the internal gear by adjusting the reduction ratio impacts the power. Understanding the math behind it is the key.

Understanding How the System Works

Simple planetary gear sets are used in every field of engineering.

Because they’re used for acceleration and speed reduction, they’re essential to automatic transmissions in cars, wind turbines, and aircraft.

In short, when speed and/or torque are involved, an epicyclic system is likely present.

You already know the four main parts and the potential systems you can create. Now let’s talk about how these gears actually function:

How Do Planetary Gear Sets Work?

The gears rotate slowly, quickly, or in reverse. The motion depends on the speed of the internal and external gears.

When Gear A and Gear B have the same speed at their mating point, the gear teeth in both are moving. But when Gear A is moving and Gear B is zero, the planet gear is spinning and turning. When you swap the variables and make Gear A zero and Gear B moving, the effects reverse.

It’s a complex subject, but it’s essential if you’re planning on a career in engineering — definitely a helpful skill to have on your resume! 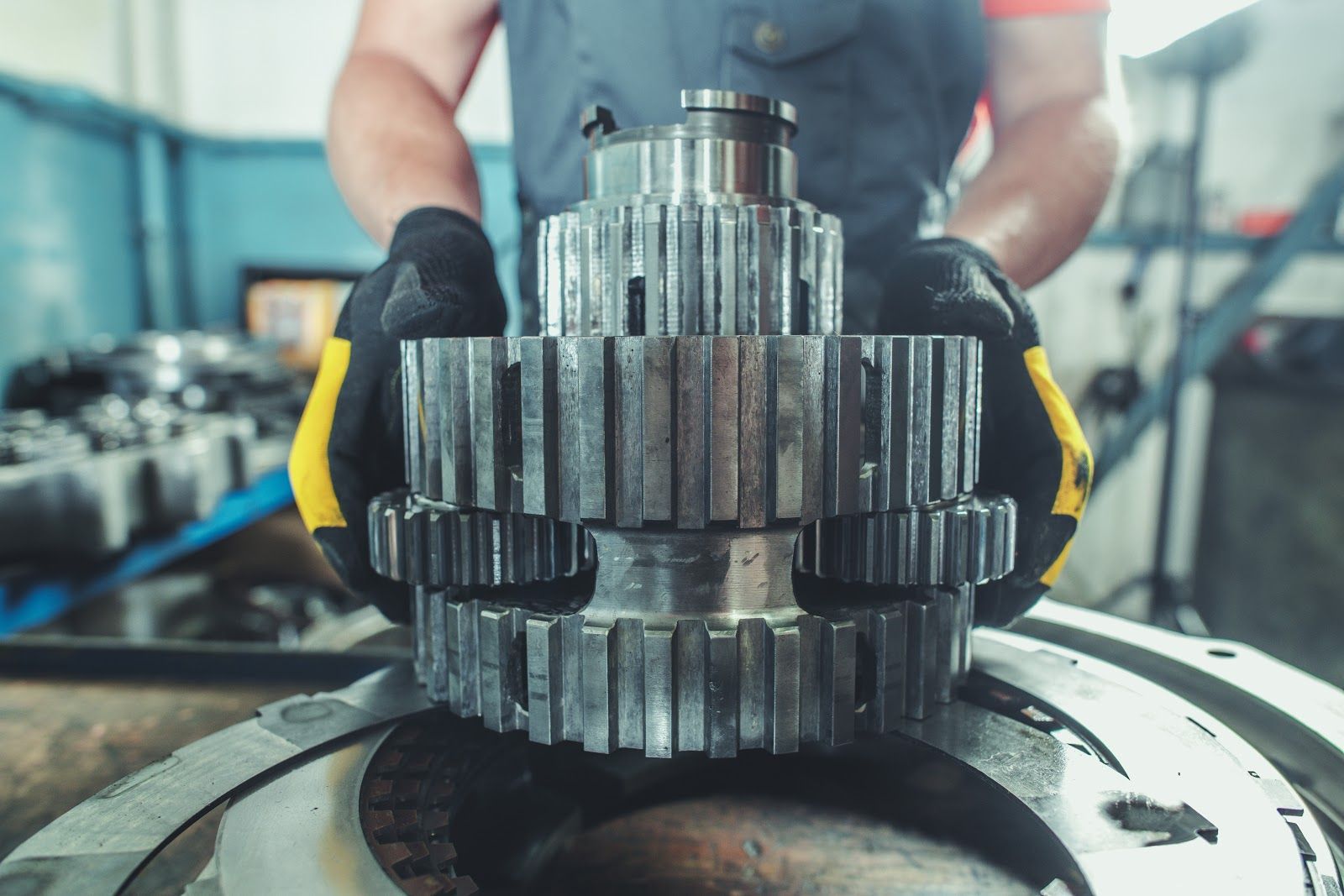 The concept of planetary gears makes even more sense when you start seeing them in action. From there, it’s about understanding how the product works and applying the epicyclic system to its engineering.

Some common examples of planetary gears you are probably already familiar with include:

Major packing companies use automated guided vehicles to complete repetitive heavy-lifting tasks. They can move a lot of volume without manual labor.

AGVs are popular because they’re able to travel long distances quickly without needing to be recharged. For that to happen, the planetary gearboxes have to be compact and lightweight, with the input shaft meshing with the output.

Rotary tables are used in places where precision is key. Machine arcs and circles are difficult to make manually, but with an angle gearbox and the right lubrication, the tool can be rotated to a precise degree.

Angular gearboxes with a gear ratio of i=5 and i=10 are the most common. With these ratios, there’s a high performance rating that correlates with a high input speed for fast work in tight spaces.

IML, or “in-mold labeling” processes, are part of the innovative wave of industrial automated robots. With IML, the robot owner can control the velocity, acceleration, and deceleration by adjusting the parameters to get the positioning and speed they prefer.

IML robots are used for packaging and labeling. Pre-cut plastic films are applied with a vacuum or static charge. These affix the labels to the package, which are then back-injected with a plastic covering.

It’s easy to see the planetary gear here, where the mechanical axis of a laser-cutting machine has to be fast but accurate.

The gearbox helps determine the main parts of the machine: the stroke, positioning accuracy, driving force, and rigidity.

The last thing a surgeon needs in the heat of the moment is a malfunctioning operating table. Epicyclic systems are used to automate the process.

Having the ability to smoothly position the patient’s height is essential. Using planetary gears with the right ratio reduces the noise and establishes a smooth adjustment up or down.

These are all examples of standard planetary gear systems. Mastering them and the concepts behind them will help you develop more complex and high-quality ideas for your own designs.

Once you understand standard gear systems, you can add coupling and complex epicyclic systems. The key to your machine is in the right ratio and gear speeds. It’s hard to go wrong when there are so many things you can do with a planetary gearbox.

Although the underlying concept of the gearing system is simple, creating a machine can be a lot more complicated. It all depends on what you want your project to do. High weight, high speed, and wide distribution all require a few gearboxes working together.

Truly grasping the underpinnings of epicyclic systems can take weeks or months. The easiest way to do this is to start with the standard system and work your way up.

It’s not an easy concept to master on your own. Sure, the fundamentals are within your reach, but you should watch plenty of online tutorials (and maybe even take an online course). Once you’re past the basics, you’ll be able to design your own innovative products that use these intriguing systems.

And with the power of automation and 3D printing technology today, there are no limits to what you can do with planetary gears!